The long and ongoing fight between the Migrant Workers Rights Network (MWRN) and the Thai government over the right to form a union is still not over. What changes could help ensure ethical workplace practices and improve the quality of migrant workers’ lives?

On 28 August 2022, Myanmar workers gathered at Wat Thep Norrarat in Samut Sakhon to elect the committee of the MWRN, a membership-based civil society organisation that aims to educate Myanmar workers about their rights and the law, raise awareness, promote access to justice and negotiate with employers and the authorities. 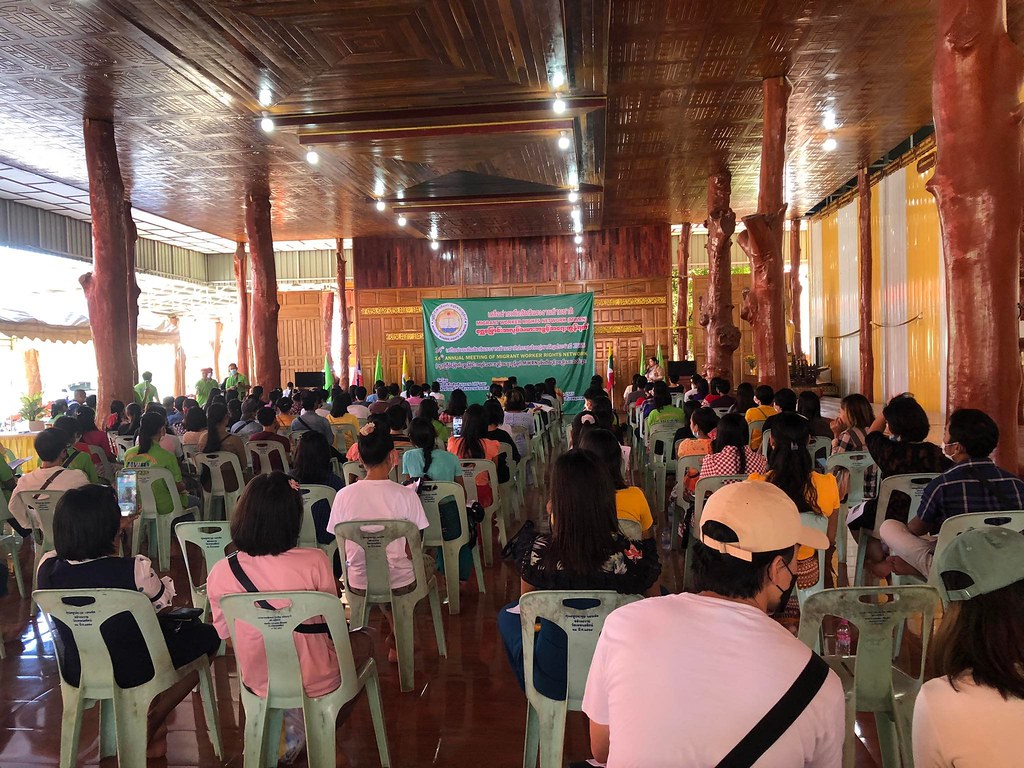 "Educate yourself, create networks, tell your friends about MWRN, and people will respect you," said the MWRN spokesperson during an election that currently involves mainly women. One of the staff sees the proportion of females as a reflection of their former popular national leader, Aung San Suu Kyi.

The organisation works as a bridge by voicing the needs of the workers to the government. Besides advocacy, MWRN also offers a Thai language course for its members. A week prior to the election, more than 44 Myanmar members were studying the Thai language with the organisation.

Aung Kyaw, a current MWRN advisor, first worked at a shrimp peeling factory. Since then, he realised the importance of learning about labour rights, so he decided to go to an NGO and learn more about it. After that, he was determined to help out other Myanmar friends by forming the MWRN organisation with nine others in March 2009.

Aung Kyaw has worked with the organisation for more than 13 years, accumulating information and requests from members and submitting them to the government. As a result of joint efforts made with other CSOs and labourers from other areas, the minimum wage was raised from 331 baht per day to 353 and female workers now have 98 days of maternity leave, up from 90 days.

"We dedicate ourselves to fight for our own rights," said an MWRN advisor.

These are a few examples of what the organisation is advocating, even though they cannot yet form their own union.

Myanmar migrant workers faced a hard time in Thai society even long before the Covid-19 global pandemic. They have been working in a context of prejudice among Thais who think they steal jobs from Thais, even though many of their jobs are ones that Thais refuse to take. The situation deteriorated after the Covid-19 outbreak reached Thailand.

At that time, fake news spread misinformation that Myanmarese were the source of Covid-19 contagion in Thailand by illegally crossing the Thai border. This misinformation enraged Thai citizens and created greater prejudice against migrant Myanmar workers and even more discrimination in Thai society.

"Some of my friends were refused service by shop owners," said 41-year-old Myanmar migrant worker A Ma Oo. 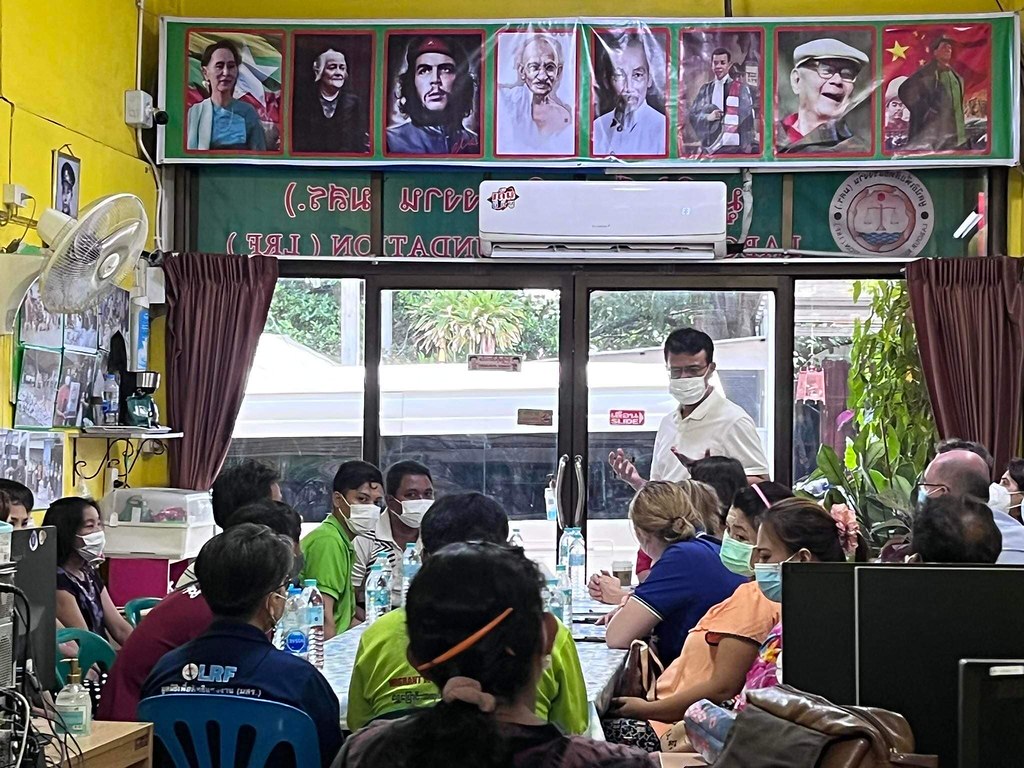 The atmosphere of the MWRN meeting.

In the past, migrant workers regularly faced abuse from brokers and employers. At times, employers retained workers’ passports and essential documents, causing insecurity and lessening the workers’ negotiating power. Sometimes job brokers would make deductions from wages before paying workers. With little knowledge about their rights, the workers did not know what could be done to them and what could not. This led to exploitation at work.

However, circumstances seem to have changed. A Ma Oo, a worker from a fish canning factory who is also a MWRN member, says she has never once witnessed any abuse by employers against employees. Workers nowadays also receive payment directly from their employer.

She also extended her initial stay from five to ten years because she was satisfied with her working conditions in the fish canning industry. The political conflict back in Myanmar was another reason for her to stay here, as she needs more money to support her family in Myanmar.

However, problems still remain from a lack of knowledge. She shared a story about her friend who lost a finger in another smaller factory and who she told to ask for compensation. Knowing little about her rights, the friend refused and decided to pay for the medical treatment herself.

Despite improvements, there is still room for more, such as Thai laws to ratify the ILO Conventions 87 and 98 which would allow migrant workers to form labour unions. Current Thai security laws allow them to be members of other unions, but not form a union of their own.

The organisation recently petitioned the government for permission to hold their own assembly without having to go through Thai staff, according to the International Labour Organisation (ILO).

Even though the government refused the organisation permission to conduct a peaceful assembly, they still continue to petition at every occasion.

Aung Kyaw elaborated further: "I think the Thai government is hesitating to ratify these ILO conventions because the labour community in Thailand is massive, and they are afraid of the labour movement”. Changes to the law could help ensure for workers the security and freedom that all humans should have.

There was some improvement after the last meeting between the MWRN and government representatives. The MWRN advisor said at the previous meeting that the government had agreed on increasing the minimum wage.  "Starting from October, daily wage rates will be increased differently for different provinces." added Aung Kyaw.

The right to conduct a peaceful assembly will help the organisation work more effectively. A collective voice is needed to be lawfully recognized, as with any gathering. "Our rights to association and collective bargaining are not legally sanctioned, so we want some legal recognition. And we will not give up what we are doing now," Aung Kyaw added. There is still no clear answer from the government side on how these changes will come about.

This site uses cookies. By continuing to browse the site you are agreeing to our use of cookies.