Urgent Statement: Recommendations to Prime Minister for the prevention of Civd-19 outbreak as part of the management of foreign workers 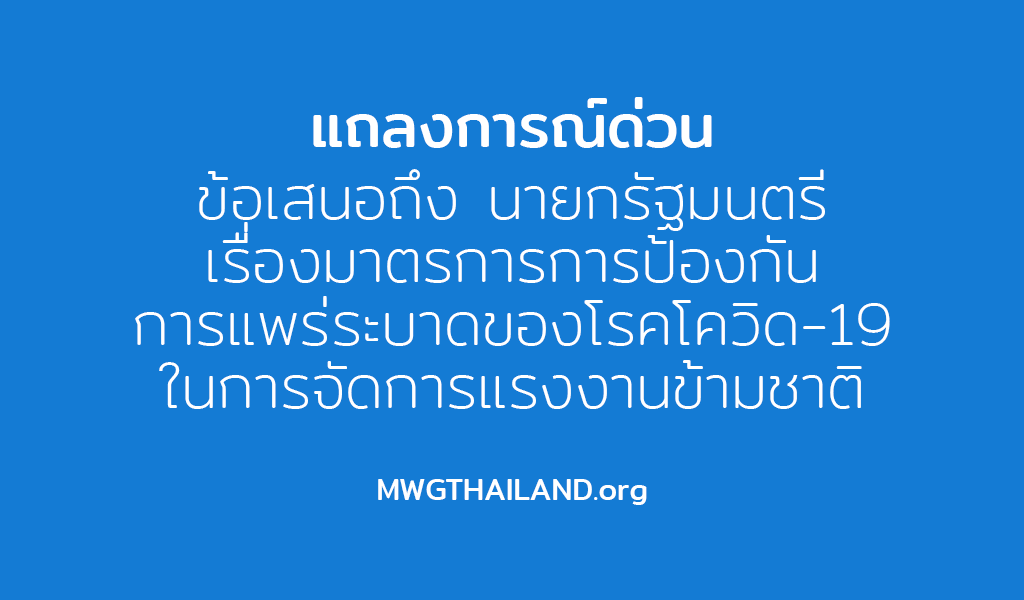 Urgent Statement: Recommendations to Prime Minister for the prevention of Civd-19 outbreak as part of the management of foreign workers

As the Civd-19 Outbreak appears to get worsen and given more stringent control measures are being meted out by countries including the lockdown of epidemic prone areas, the shutdown of some workplaces, the government’s ban on mass gathering, the closure of border checkpoints between Thailand and neighboring countries. This has led to restriction of freedom of movement as part of the disease containment.

Despite being necessary, the measures can cause grave impacts of the day-to-day life and the grassroots economy, particularly the impact on workers, migrant and Thai. It will make it a challenge for migrant workers to renew their work permits per the cabinet resolution on 20 August 2019, the suspension of the MoU import of workers from neighboring countries. It will also affect seasonal employment or the border employment as several workplaces have to face temporary shutdown. The closure of some offices will hamper the chance a number of migrant workers to renew their permit to continue staying in the country and will face the uncertainty in their employment given the current situation. This has led to an exodus of migrant workers who are desperate to return to their countries and the sudden crowdedness at public transportation terminals and border checkpoints. Such congestion could lead to the exacerbation of the outbreak in provincial areas and in their countries of origin. Given such concerning situation, the Migrant Working Group (MWG) which has been working closely with migrant workers and other migrant populations, have the following recommendations to propose to the government;

1. The Prime Minister and the Minister of Interior as competent officer of the Immigration Act should allow migrant workers or other migrants to continue living in Thailand longer than the initial permission they have received given that they are not able to return to their countries of origin now. Otherwise, the permission should be extended to allow them to stay temporarily in Thailand and to allow them to waiver any fine as a result of
their overstay.

2. As to the migrant workers who have entered to work in the country per the MoU program and whose permission to work and stay in Thailand for four years is going to expire, they should be allowed to continue to stay and work in Thailand provisionally. They should be given at least 30 days as a grace period of time before they have to leave the country in order to minimize the exodus of the migrant workers.

4. The deadline for the application of work permit based on special MoU per the cabinet resolution on 20 August 2019 should be extended and the migrant workers should be allowed to continue living and working here pending the application process. The migrant workers who are yet to be name-listed since their new employers have yet to enter their names into the lists within 15 days as a result of the confused situation among the officials, they should be given more time to apply for the registration per the cabinet resolution on 20 August 2019 to minimize impact on the import of workers per the MoU and to avoid having to return to their countries of origin. It is estimated there are at least 500,000 of workers in such situation.

5. The seasonal workers and border workers per Section 64 of the Royal Ordinance Concerning the Management of Foreign Workers’ Employment are now allowed to work 90 days, although they have to return to their country and reenter Thailand every 30 days. They should now be allowed to stay for the full 90 days without having to leave and reenter every 30 days in order to minimize impact on the outbreak.

1. It is advisable for the people and migrant workers to avoid travelling during the outbreak of the disease. But if it is necessary to travel, particularly to travel across the country, concerned authorities should come up with measures for disease screening and control and coordination should be made with the countries of origin concerning disease surveillance and prevention.

3. Given the language barrier among the migrant workers and migrant persons and how it hampers information and measures by the state as a result of the lack of effective communication with the migrant workers, it could give rise to panic and confusion. Concerned authorities should in collaboration with the Migrant Working Group (MWG) therefore produce publications and materials in various languages including Myanmar, Cambodian and Laos, particularly announcements about the free diagnosis and treatment of Covid-19 patients and tips on how they can protect themselves against the disease and to publicize among the migrant workers and migrant populations.

Migrant Working Group (MWG) believes measures developed with participation from all sectors of migrant workers and migrant populations should help Thailand and the region to overcome the Covid-19 outbreak.