An Open Letter : Recommendations on the management of foreign workers 2019-2020 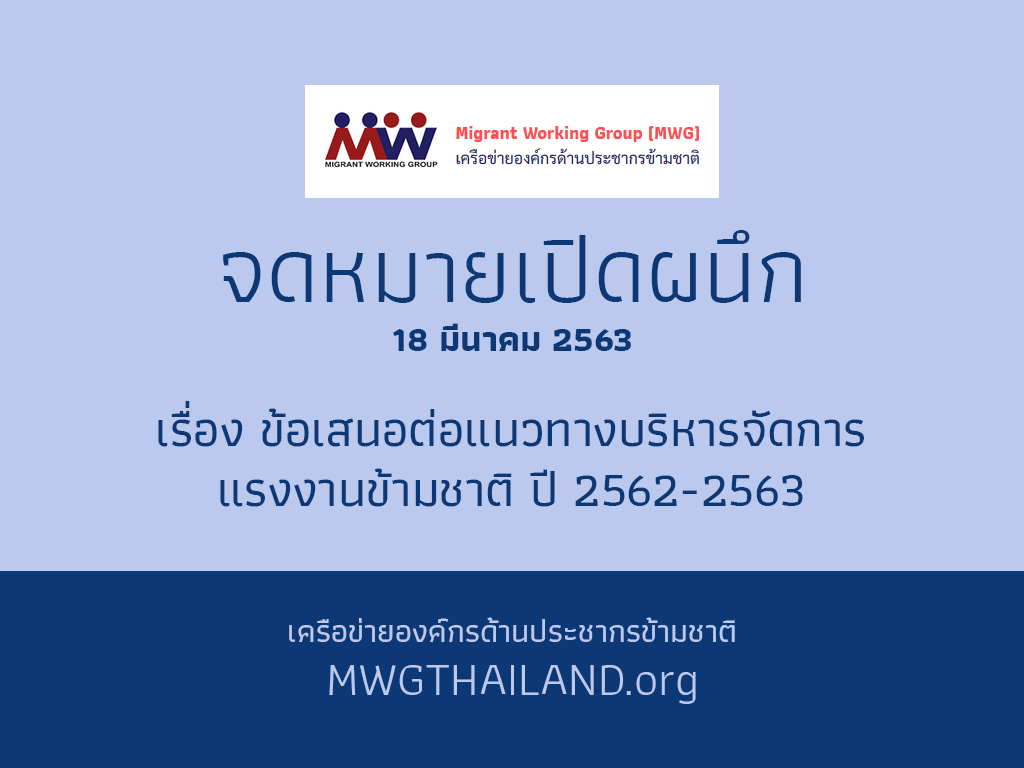 Subject: Recommendations on the management of foreign workers 2019-2020

In pursuance to the cabinet resolution on 20 August 2019 concerning the management of foreign workers 2019-2020 through a special MOU arrangement, the Migrant Working Group (MWG) has observed the labor registration at One Stop Service (OSS) Centers and have received complaints from both the employers and migrant workers including;

1. The establishment of One Stop Service (OSS) Centers and the provision of online applications are a good practice. But in reality, a number of employers and migrant workers do not understand the procedure and have no access to online application service. It has led to the procrastination of the process. The data input process also encounters problems since personal data of some migrant workers has yet to be keyed into the system. It has thus caused much delay. In Bangkok and large provinces, delay has initially taken place with regard to the health checkup at health facilities since for example, some hospitals can only do the checkup for up to 40 persons a day. Thus, in the beginning, the number of workers who have gone for registration was small, but toward the end of the program, it was quite congested. Given that there is less than one month left before the end of the program, it is estimated that only 30% of the migrant workers have completed the registration process. It is concerning that all migrant workers may not be able to complete the process in time.

2. The number of migrant workers targeted per the cabinet resolution is 2,001,379 including;

2.2 Those whose permits will expire after 31 March 2020: 1,739,888 It is found that the employers have already name-listed about one million migrant workers and the Department of Employment has reduced the initial target from 1,739,888 to merely 1.1 million. As a result, the number of migrant workers who will be left out from the process would be about 700,000 due to several reasons including the data of the migrant workers has simply vanished from the system, the termination of their work permit as their previous employers had notified their termination of employment to the authorities, but they have failed to find a new employer within 15 days. It is found that the missing data, in many instances, could be attributed to the work of local officers concerning the registered entries of the workers and the counting of the days before a new employer can be found. As a result, data of a number of migrant workers has been missing from the MoU system. It is concerning that the applications of the migrant workers are either pending or that they have been working in Thailand even though their permits have already been revoked.

Based on the above finding and concern, MWG have the following recommendations for the Department of Employment;

2. Efforts should be made to review the procedure to address the problems with the online database, the fact that some employers have no access to online application system. The delay in health checkup, and to facilitate the document processing.

3. Measures should be put in place to mitigate impacts on the migrant workers who may fail to process their documents as required by the cabinet resolution and efforts should be made to make it convenient for workers who have to return to their country of origin to reenter the MoU process based on this special arrangement. This should help to reduce the epidemic risk of the Covid-19 and address the delay of the procedure in the country of origin concerning the export of workers to work in Thailand via the MoU system. A special arrangement could be made to waiver the requirement of having to return to the country of origin as being done now.

With respect in human rights and human dignity